Before a model starts to look pretty, a lot of work has to go into installations.

First to the business end of the model, and mounting the engine.  The plans call for an offset engine mount, about 2.5 degrees to the right, which helps to deal with engine torque that tends to roll the aircraft to the left and can cause catastrophic tip stalling on take-off.  A shim was made from hardwood to sit behind the engine mount, and the engine mount centreline is shifted 7mm to the left so that the prop hub remains in line with the centre of the fuselage. 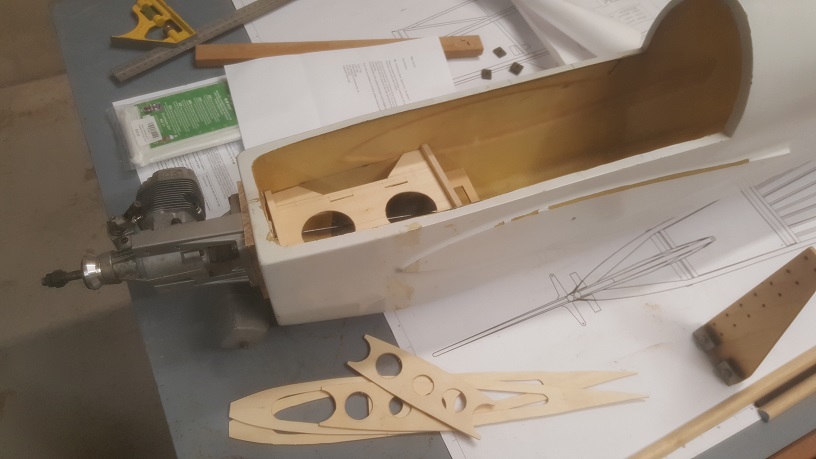 From the picture you might be able to see how neatly the muffler tucks underneath the side-mounted motor – a  perfect arrangement.  The whole lot is hidden inside the cowl. This might seem trivial but experienced builders will know why it’s exciting.

A 6mm ply firewall was also glued inside the model as the one built into the fibreglass is way too thin.  The engine mount is held in place with 5mm screws that go into blind nuts epoxied into the firewall.    That’s probably the trickiest part of the build completed.

Behind the firewall you can see a 1.5mm ply tank mount that will be screwed onto ply brackets, which are epoxied to the fuselage.  The 20oz tank will be held down with two velcro strips (you can see the velcro slots).

(The ribs in front were cut from 1.5mm ply in preparation for the wing construction while waiting for glue to dry). 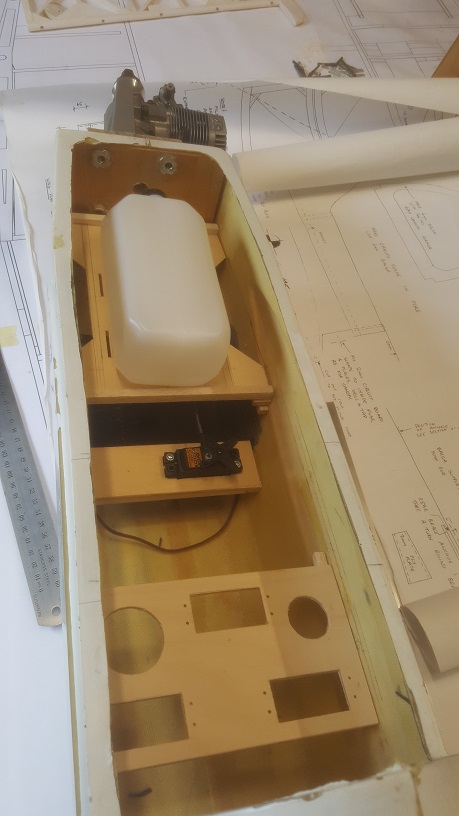 Above is a view from inside showing the tank placement and throttle servo.  Behind that is the servo tray installed for the rudder and elevators from 3mm ply.

The throttle servo is connected to the carburettor with 4-40 threaded rod, which is joined to a 6mm spruce rod for stiffness.

I immediately adjusted the servo throws to prevent any future damage.  The servo end points were initially set to 50% each way, then graduated up from there to achieve a fully open and fully closed throttle.  This is all very easy with modern computerised radio transmitters.